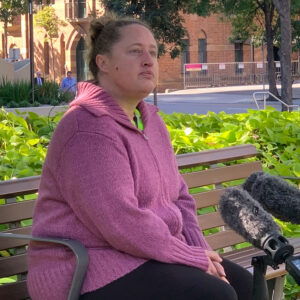 Louise Brimson is a working mother of two teenagers.

Louise lives in Brisbane’s bayside, is a survivor of domestic and family violence, and has raised her two boys single-handedly for over 10 years.

She has rented homes for all of her adult life.

The rental home that Louise has most recently lived in had multiple maintenance issues, and after spending the first few months asking for these issues to be remedied, it became obvious to Louise that the agent and landlord were not going to fix them.

Louise was at one point without power for 3 days the real estate agent eventually organised for a faulty bathroom exhaust fan to simply be disconnected, rather than fixed, leaving the bathroom prone to condensation and mould.

A breach notice was made by Louise on the landlord due to a significant water leak on the property. The landlord was still expecting Louise to pay the water bills in full, for water that was simply going down the drain.

Recently, the real estate agent gave Louise a Notice to Leave Without Grounds. No reason was given as to why the family had to move out.

Being evicted has physically split the family apart.

Not being able to find a rental property within the 2 months, Louise’s family would have become homeless were it not for the kindness of a family member who has been able to take in 2 of the 3 family members. One son has had to move in with a friend.

Having just spent significant time and money moving out of the rental property, Louise is just about to recommence the process of looking for a home where she can live safely with her whole family.