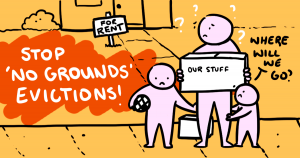 At Make Renting Fair, the biggest issue we’re trying to change is getting rid of unfair evictions. These are used to target renters who have done nothing wrong and are one of the reasons renters often need to move house. We believe a home should be safe and stable and fixing this law will mean renters can feel more at home.

Terminating tenancies without any grounds creates fear for tenants who become afraid of retaliatory or discriminatory eviction, and allows dodgy landlords to get away with subpar housing.

Here are some real-life examples from Queenslanders.

These are real case studies, but their names have been changed and identities protected, because they were afraid speaking publicly would have a negative impact on their tenancies.

George has a five-year-old child and found asbestos in the backyard of his rental property on the Sunshine Coast. He asked for the asbestos to be removed, without success. Fearing for his family’s health, he tried to get it rectified but the landlord refused.  The only option left for George was to try to end the tenancy early. George had the stress and worry of making an application to QCAT (which he won) and the added problem of finding another property and moving at his expense. George has now moved but is worried about being perceived as a troublemaker by his new property agent. He wants to support our campaign publicly, but he’s too scared for fear of reprisals. He believes minimum housing standards and improved processes for getting repairs done should be introduced into Queensland tenancy laws. 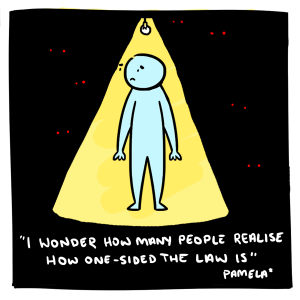 Pamela spoke to her real estate agent about a couple of issues within the new building she was renting. The basement carpark lighting wasn’t working adequately, and she had a few security concerns about the building in general. She was shocked to receive a Form 12 the next day and says, “I was stunned to discover the landlord’s agent would get rid of me rather than attend to the building’s issues and residents’ safety…I wonder how many people realise how one-sided the law is. I have been a landlord and still didn’t! The laws need to be changed, but supporting the MRF campaign could be held against me. I’m going to think twice before talking to an agent about a building fault again. 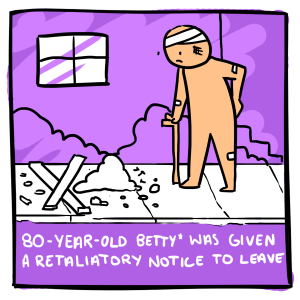 Betty is in her late 80’s and had repairs done to her rental property in the outer suburbs of Brisbane. Once the repairs were completed, the landlord left some items on the ground, and as a consequence, Betty fell. She took steps against the landlord because of her injuries. In return, she received a notice to leave without grounds, which she fought because she considered it was retaliatory.  With the help of a tenancy advice worker, Betty took her case to QCAT and won. Betty now lives on a periodic tenancy, fearful of another notice to leave without grounds. She’s too scared to publicly support our campaign in case it causes more trouble, and she has to leave her home. If she hadn’t had the support of the advice worker, she doesn’t know where she’d be now. 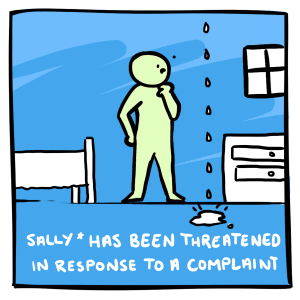 Sally is a single parent in North Queensland who has lived in the same property for five years. Over the last year, she has had consistent water leaks in her bedroom. Sally endures constant drips that occasionally turned into a stream, splashing through her bedroom. Sally requested a repair, but no action was taken. When Sally said she would make a formal complaint, she was told a formal complaint might result in her lease not being renewed later in the year. She strongly supports our campaign but is worried the agent might make good on her threats to end her tenancy if she speaks out.

Community service providers who work in association with real estate agents are also not immune.

Ordinary Queenslanders should not live in fear of eviction or be punished for asking for better than subpar housing. We deserve better than our existing tenancy laws.

Email your local Member of Parliament to let them know you support an end to without grounds evictions.

Tell us about your own eviction experiences by emailing: [email protected], or send us a video on our Facebook or Twitter page.

*Not the real names of the community service providers.